Delegation of the Ministry of Education Visited IAOS
Release date: 2019-09-30

On September 26th, Weng Tiehui, Vice Minister of Education, led a team to investigate Ocean University of China. They listened to the school’s work report, and then gave guidance in the construction of ideological and political theory courses, the thematic education of remaining true to our original aspiration and keeping our mission firmly in mind and the construction of double first-class. 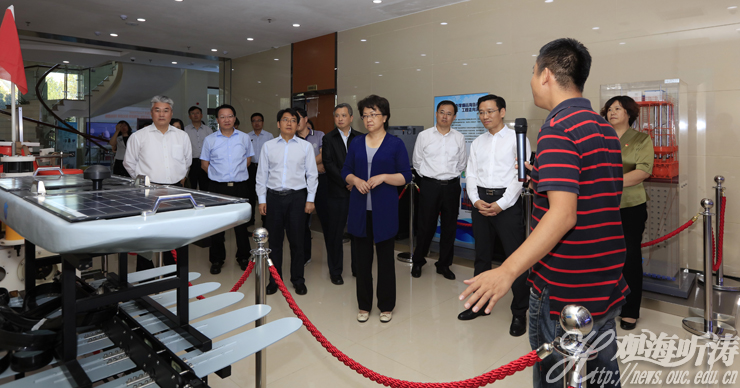 Before the symposium, Weng Tiehui and his delegation visited IAOS of OUC. Professor Lin Xiaopei, deputy director of IAOS, explained to the Minister and his delegation a variety of ocean observing and monitoring instruments developed by OUC independently. The focus of Prof. Lin’s explanation was on the “Transparent Sea” project promoted by OUC at full blast. Namely, by using modern ocean observation and detection technology, a Marine Internet of things system would be built, so as to realize the transparency of the state, process, change and target of the ocean, and then solve a series of major scientific problems such as marine environment change and climate effect, etc. The minister had an in-depth communication with Yu Zhigang, the Principle of the college, and Dr. Wu Lixin, Academician of Chinese Academy of Sciences, on some scientific problems during the visit. Weng affirmed the scientific research achievement that IAOS had achieved. Meanwhile, he encouraged the scientists of OUC to provide comprehensive and accurate marine information technology support and services for national marine economic and social development continuously.

he rest of the participants are Xu Yanguo, Deputy Director of the social science department of the Ministry of Education, Zhang Jing, Executive Deputy Secretary of the Party Committee, OUC, Vice President Li Weiran, Yan Ju, Li Huajun, Wu Lixin, member of the Standing Committee of the Party Committee and assistant to the President Wu Qiangming, Dr. Bao Zhenmin, the Academician of the Chinese Academy of Engineering, and heads of relevant departments of the university.